I went ahead and analyzed this Pro game of 504. I recommend you read through my comments as you look through the game. There were no big mistakes from 0 to 70 (of 504).

At 70, after cashing the R column, Ch1-e8 is bad, because it will take you two more moves to poise the 8-row. Instead, you should create a C three-line diagonal (e.g., Cg8-c7). Less attractive would be to create a G three-column (Gc3-a5) because it is blocked by Ya3, but that would still be much better than Ch1-e8 as played.

At 192 (after you played Rg4-d3 and Rf3 dropped), moving Ge3 is a +2.5 blunder (there is positional compensation in unblocking the central R row, but I’d estimate you get back -0.7 at most). You should keep busy elsewhere until the drop gives you a G two-line somewhere. For example, Cb7-a3 unblocks a B six-line.

At 244, it is a +1 mistake to cash with Yc1 because it is part of a potential six-line on the 1-row. You should cash with one of the Y balls in the upper left (or delaying the cash is a fine option). 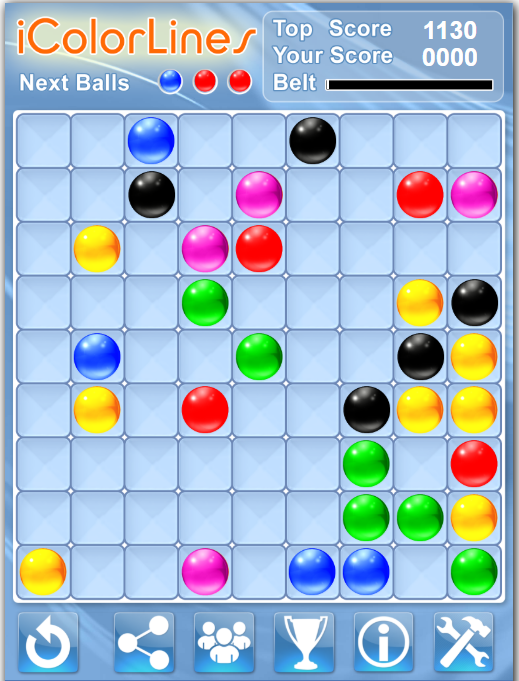 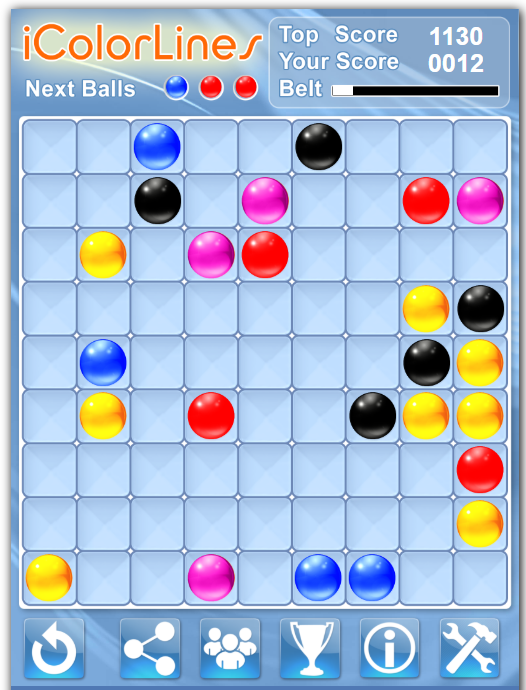 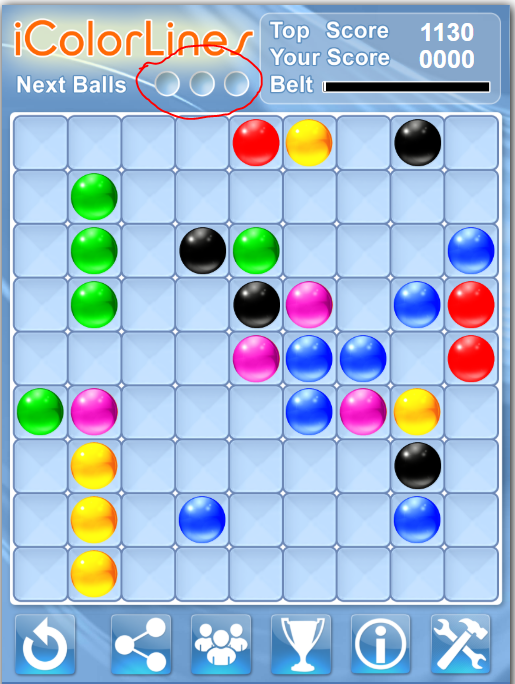 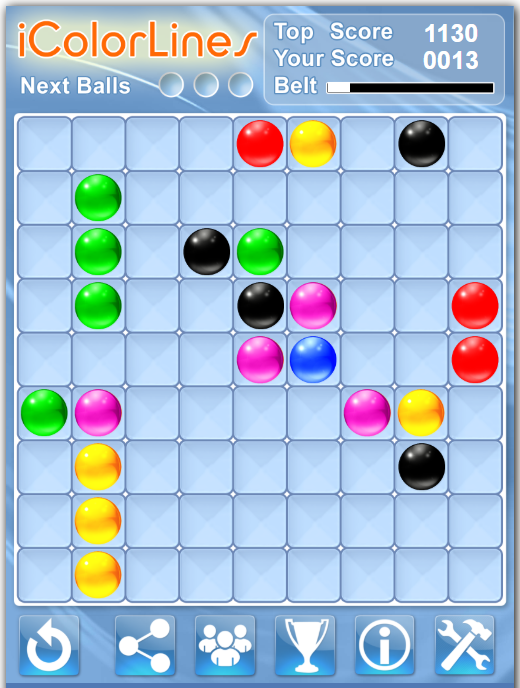 It is always interesting to see how your score stacks up against other players in your country.

In order to do that, click on “Countries” menu item and find your country.

Click on “Members” link and sort them by the “Best Score”. 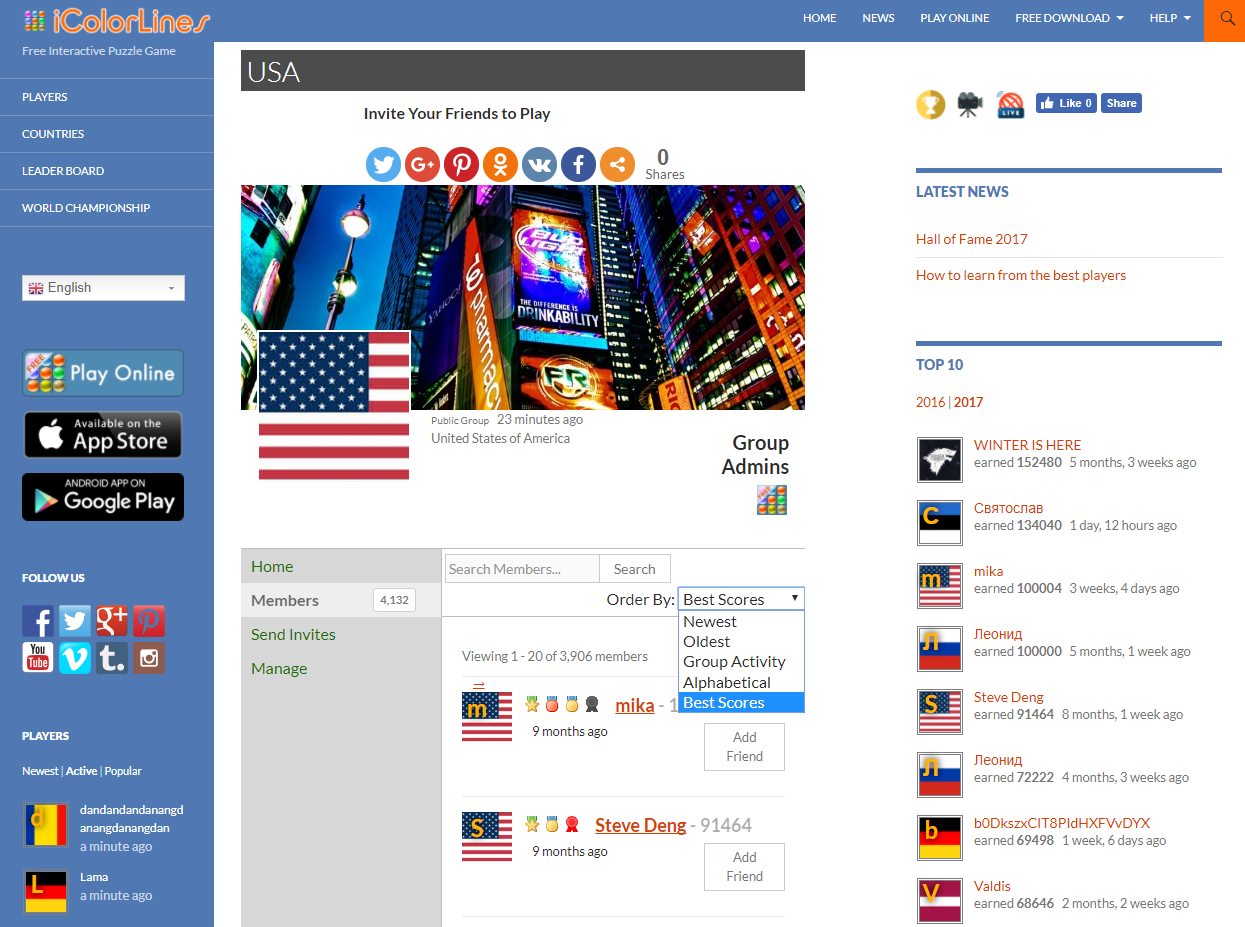 Do you know that you can click on any player profile and see his/her score history?

Just load player’s profile and move your computer mouse over the score history on the top. 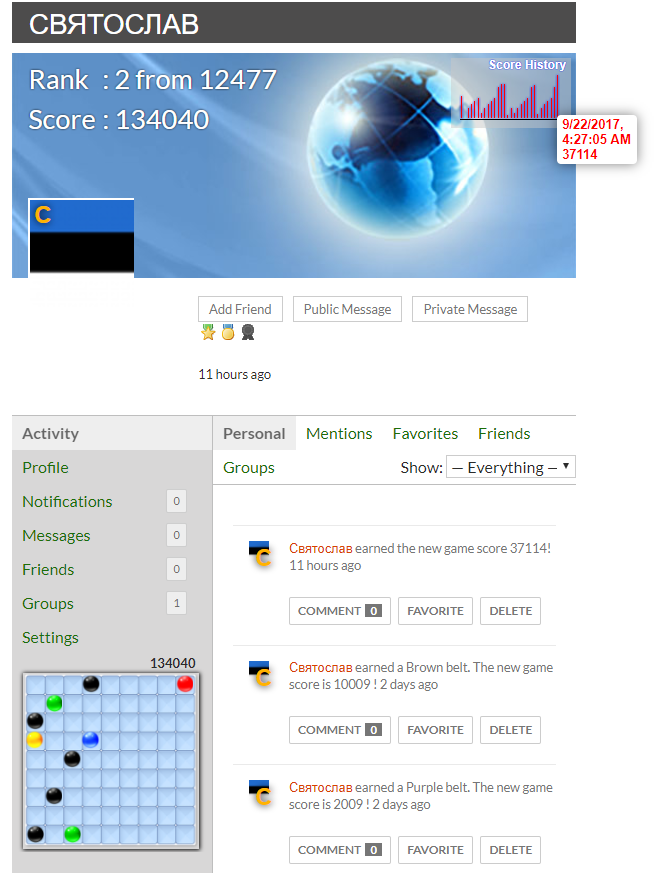 You can also see the game screen on the bottom left and notice how remaining balls are positioned.

i Color Lines Portal allows to add other users as “friend”, send private or public message. 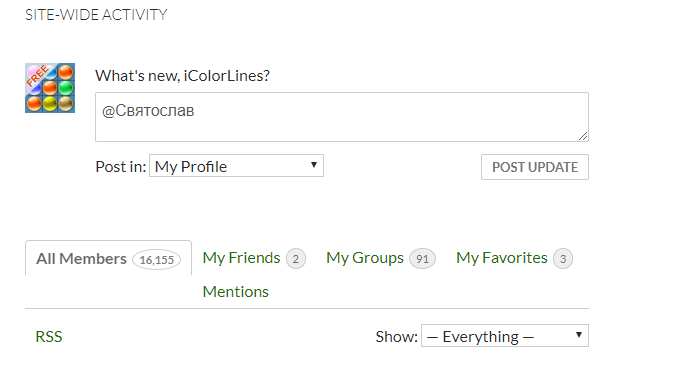 Share your thoughts and do not hesitate to ask questions, so we can help you to enjoy the game and improve your score. 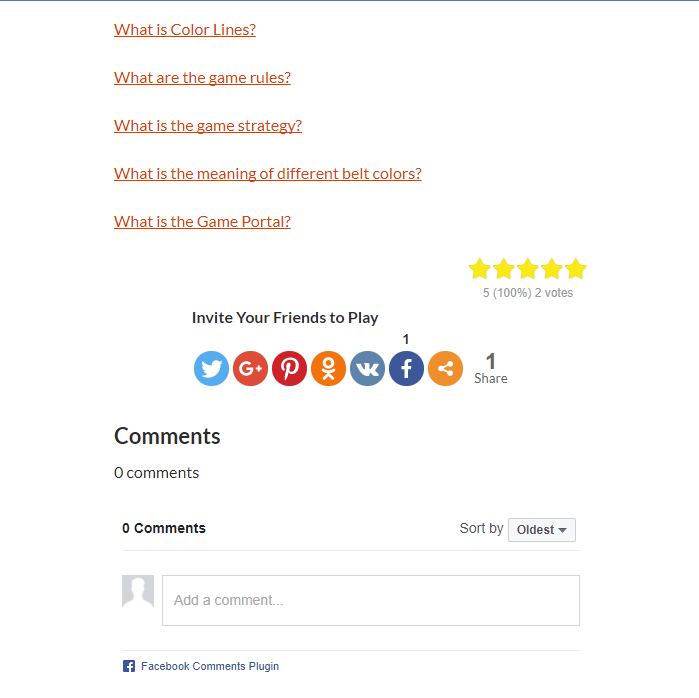 It shows three best games of day, week or month.

Do you know that you can replay and analyze your own game?
Just go to your player profile and watch your game like a movie.

You can go ball-by-ball or line-by-line.
This feature should help you to improve your skills.

Where can I find more information? 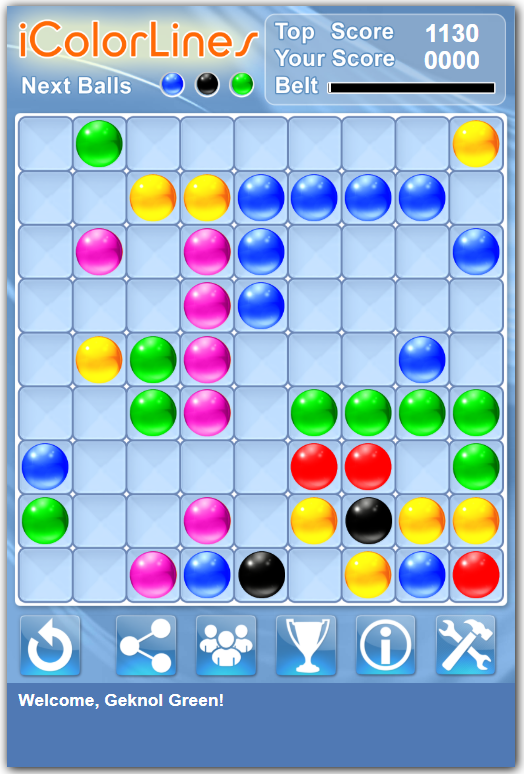 Where can I download i Color Lines Puzzle Game Free App?

Play i Color Lines Puzzle Game on your iPhone/iPad FREE! 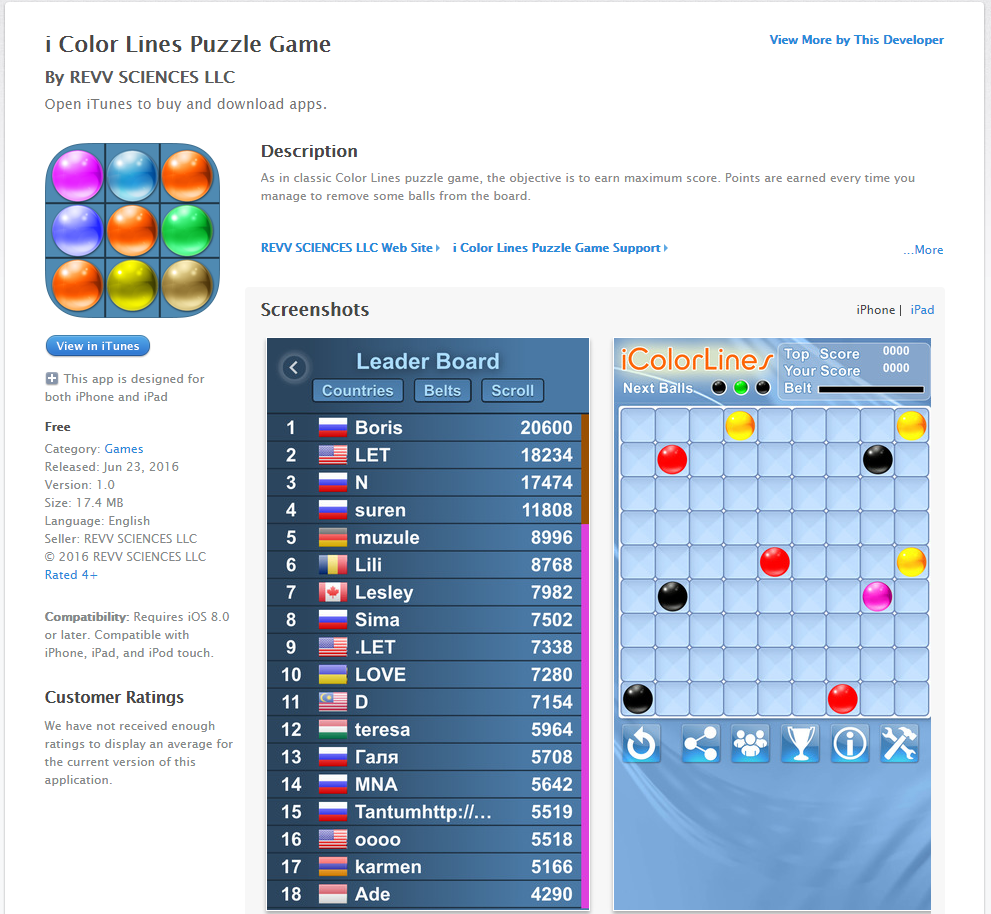 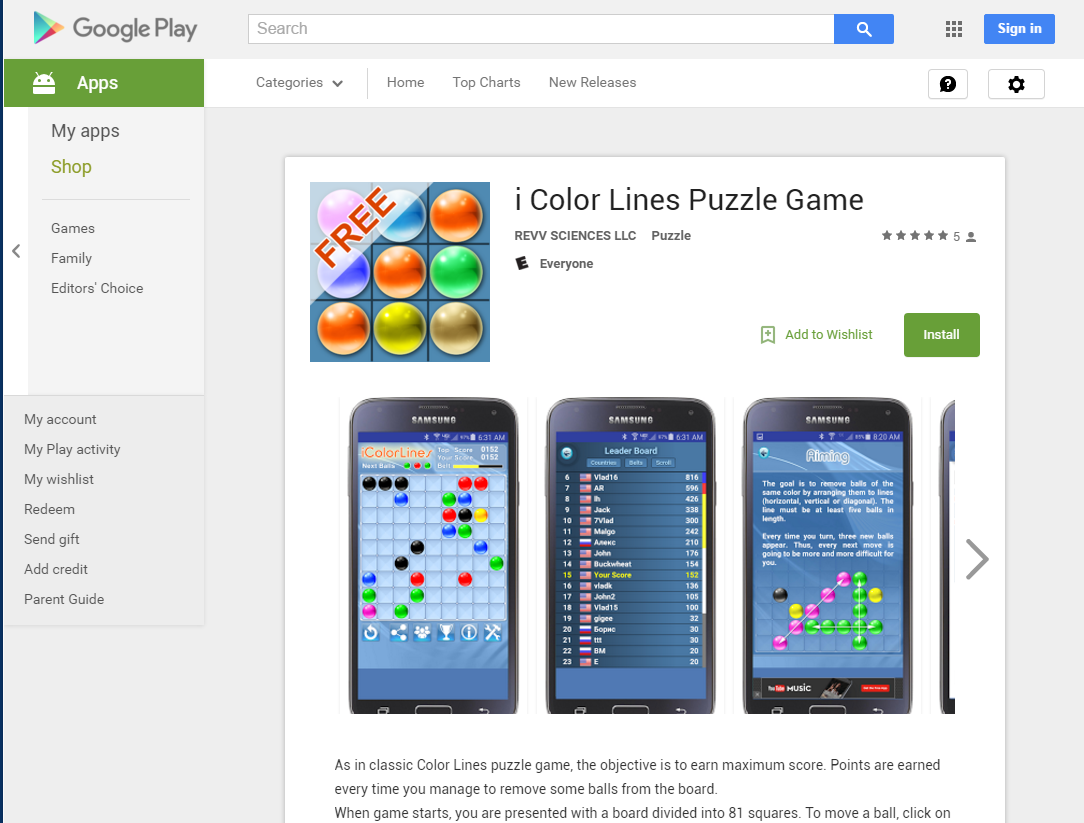 The proven strategy is to constantly clean the board and anticipate where new balls can land.

For example, let’s look at screenshot of the new game below.

Two new red balls and one violet are coming next, and you already have two violet and two red on the board.
You can try to move red ball to start the first line. 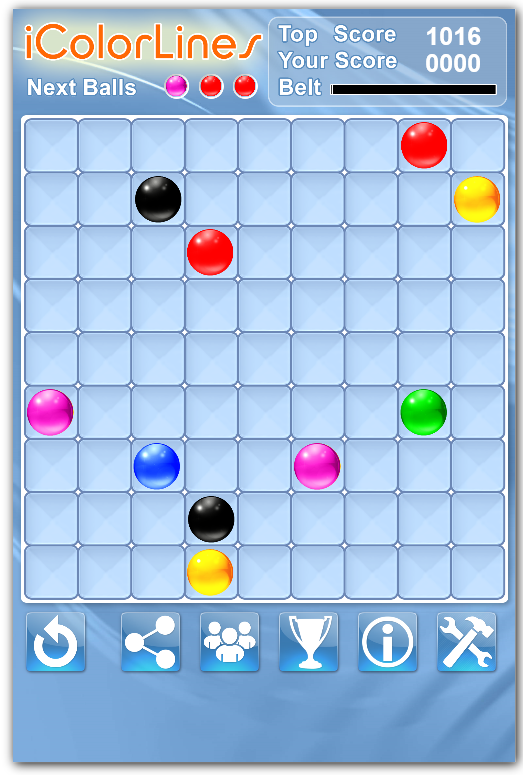 Two green balls and one black are coming, and you have two black and one green. 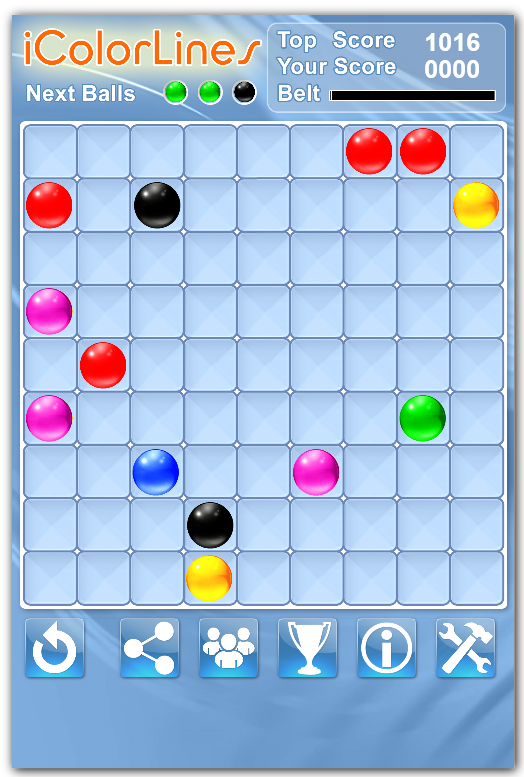 The suggestion is to move the red ball to have at least three red aligned and wait for having more green and black balls on the board. At the same time free the way for potential violet balls.

Black, yellow and violet are coming, and there are two violet, and two greens and two blacks are aligned. 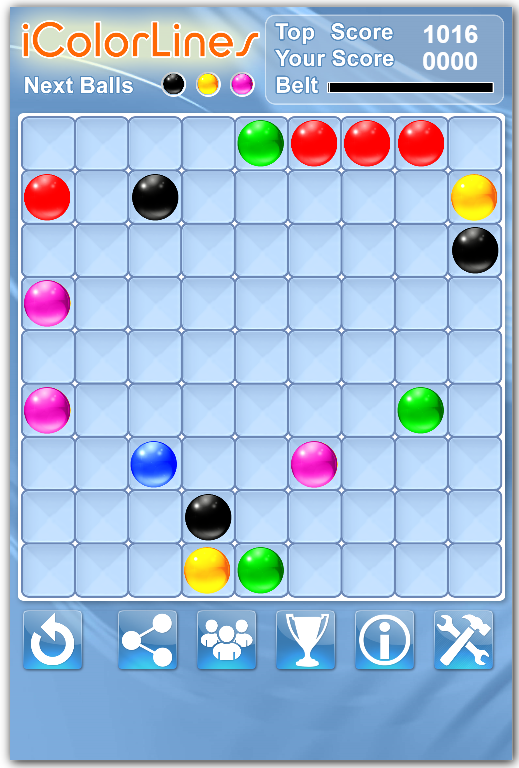 It is your next move which color ball to move. Black or violet might be more preferable to move. Let’s move violet ball. 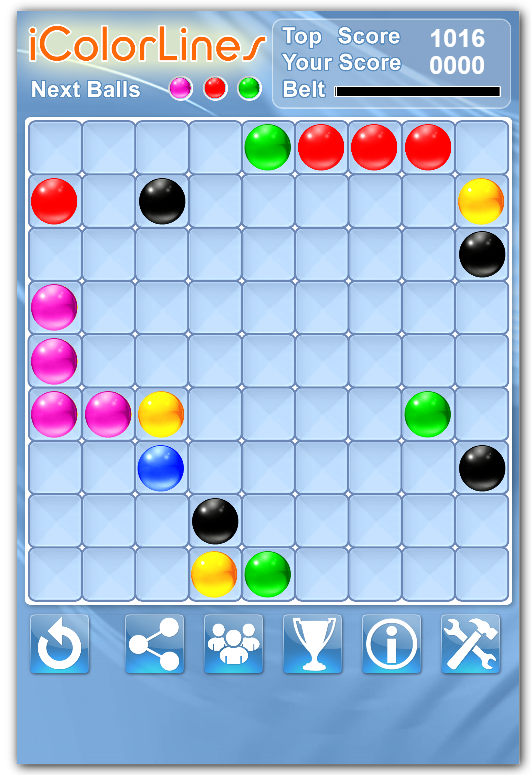 Violet, red and green balls are coming and you have an opportunity to clean five violet balls, or unblock red ones to make them eligible for cleaning. Note, if you a ball to unblock other color line, put it to the same color to create or increase the other line. Let’s move a green ball to unblock red line. 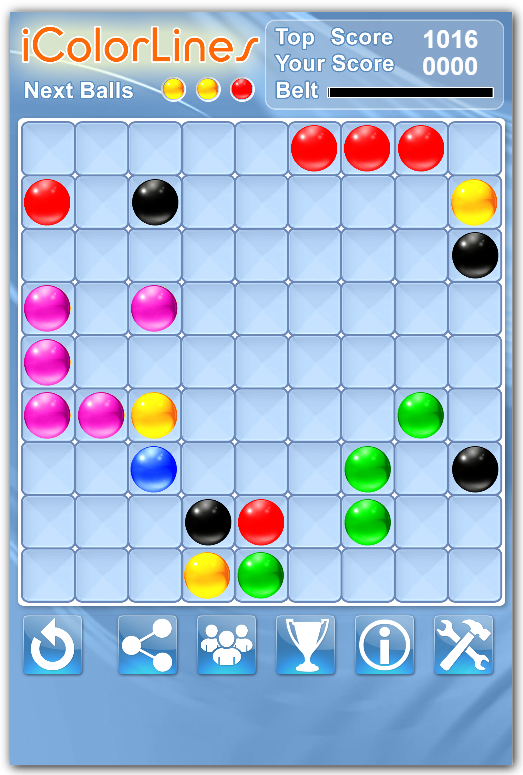 Two yellow and one read are coming. It might be a good idea to move a red ball to its line, clean it if we are lucky, and may be let new yellow balls to align themselves. And yes, it worked, red ball came to complement another four. 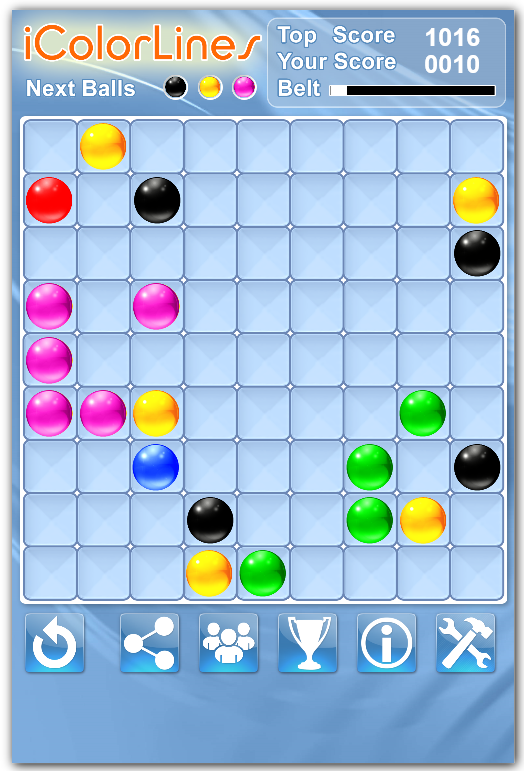 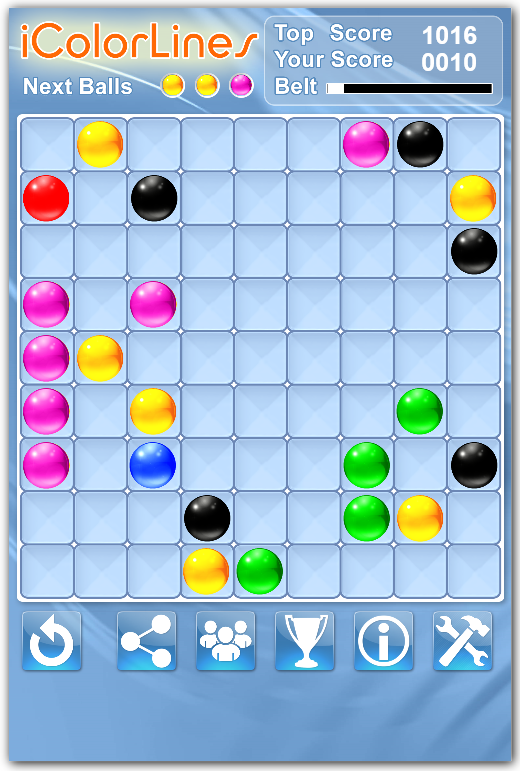 Now we are in good position. One violet and two yellow balls are coming. Violet are ready to be clean and yellow already formed some lines, we just need to free some space for yellow balls, at the same time form a black line. 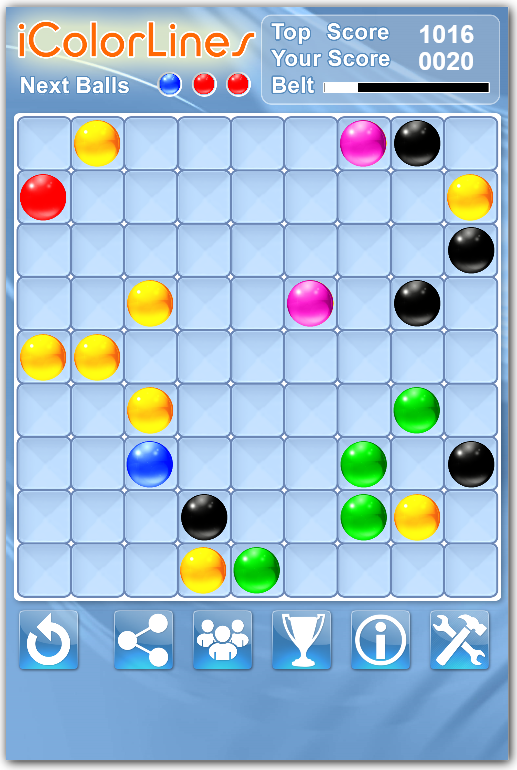 We got 20 points and various opportunities with yellow balls. Now it is a time to start your game and work out your strategy!